A reader sent me a photo that actually left me speechless. Momentarily anyway. I showed The Piano Man the image and waited for his reaction. He had plenty to say. After he expressed his thoughts I finally found mine and we ranted together. I appreciated his insight and asked him to write it down to share here. So I'm honored to share the first of what I hope are many more posts by The Piano Man.


Today Jessica showed me this: 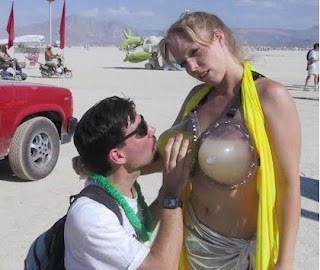 "Lady selling lemonade on the beach (reportedly clearing $250 per day)... The psychology of business is to "know what your customers want!" This guy probably does not know what he is drinking, nor does he care... because he is after something more than sugared down lemon juice. Reportedly for $10 a try, you will see when you finish sucking. So who says making money is tough? The jobs are out there!!!"
(Jessica here: Don't you just love the expression on her face? I mean, seriously, what is that?)

A woman on the beach with large manufactured lemonade-filled breasts covering her own, from which, for $10, one can find refreshment and get in touch with their baby-side.

That’s right, customers (?!) pay a lady to suck on her fake boobs - for lemonade? The short description of the picture also alluded to what said customers may catch a glimpse of once they’ve had their fill, if you catch my drift.

(Jessica again: OMG, you mean, they might see some B@@B! A NIPPLE! Oh pretty lady what else can we do to sneak a peak? Roll over? Play dead? Don't even get me started on what this reduces men to.)

Um, really? My reaction to the photograph was a mix of shock, disbelief and disgust, as well as, I must admit, a smidge of amusement for just how ridiculous this whole scene is. Let’s see if I can unravel and label my emotional response.

What would possess a grown man to publicly perform such an act with a perfect stranger? An act that is as confusing as it is absurd. To me, a man’s face interacting with a woman’s chest is a sexual thing; the kind of sexual thing that you do in private. I could perhaps see how the shock value of appearing to be performing such an act in public might be enticing for someone, purely for entertainment. But with a stranger? Maybe I’m just too old-fashioned. I’d personally be embarrassed to pretend to suck on a stranger’s breasts; and I find it extremely disrespectful to the woman, even if she is offering it as a service.

(Jessica: No sweetie, you're really not old fashioned. You respect yourself and me. That and you don't have to resort to such measures, obviously.)

Which makes me wonder: is it really OK for individuals to go offering pseudo-sexual acts for money? How about participating in a pseudo-sexual act in public? I realize that in this situation people aren’t actually sucking on this woman’s breasts, but they are sucking on fake boobs positioned in the same place as her breasts, and these fake boobs happen to be see-through; you can clearly see the lemonade in them (and maybe more...). Still, you’re paying to suck on a strangers boobs in public, fake or not. To me, this is the same thing as wearing see-through swimsuits, or clothes that have naked people printed on them. Public nudity laws? Oh, you’re not really parading around naked, right? I’m not personally comfortable walking ON that right/wrong line.

(Jessica here again: I don't have a problem with airbrushed t-shirts with naked people on them. I mean, I wouldn't wear one but w/e.)

I mentioned how confusing this thing is. On the one hand, this act can be perceived as pseudo-sexual, but when I focus on the fake breast containing a drink that someone accesses by sucking on its fake nipple, all sexual connotation disappears for me, and it becomes a nurturing act, the kind that takes place between a mother and her baby when breastfeeding. A beautiful, natural act, that my wife has shared with our babies 5 times over, in public and in private, in truth, wherever the need arises. A life-giving act. And non-sexual; because it’s not a sexual act to breastfeed your baby but rather a nurturing, mothering oen. Babies have no other natural alternative than to get their nutrition from a breast. Sure, there’s formula, now. But I’d hardly call it natural. Accepted in our culture? No doubt. But natural? The way nature, or God, intended? I don’t think so. So, back to our amusing/disturbing picture. These breasts, fake though they obviously are, have liquid in them, liquid that is intended to be ingested, through the means of a nipple to which you apply suction with your mouth. To me, it’s a nursing act, and I have long outgrown my nursing days. I am a man now. Actually, my nursing days were over even way before I became a man. I know there is conversation regarding how long a child can or should nurse. For me the limit is 2 or 3 years of age, but I regard this as a personal decision that parents make for themselves, and I’m OK with that. Even for the extreme breastfeeders, there is a limit, a ceiling that is reached, where a child decides they are through with that phase in their life. Whether it happens at 3 or 10 is irrelevant in this discussion. The point is it happens, somewhere, we’ll say, in the first 10 years of a person’s life? Therefore, to me, this picture evokes an act that any well-adjusted adult has long outgrown and has now become unnatural to them. For me, it feels wrong, I experience a physical revulsion to the thought of an adult performing the act in a baby’s stead.

(Jessica's thoughts- again: I don't care what grown-ups do in private. That's their business. However, I never appreciate a grown-up acting like a child in any public setting. Temper tantrums? No. Whining? I don't think so. Picking their nose? Oh heck no.)

Then I started wondering what kind of people both the customer and the, uh, merchant (?) are. Does the man in the picture really not see the merchant as a woman? Is she just a set of boobs? A novelty item for his enjoyment? For the amusement of others? I don’t believe for a second that what’s on his mind is quenching his thirst. Is this not a blatant example of the objectification of women in our society? Does the customer have no respect for her, or for himself for that matter? If he’s willing to pretend to perform an (infantile) pseudo-sexual act with a complete stranger, in public, what else is he capable of? What will he do next? And what about her, the woman with the goods? How degrading for her to let who-knows-how-many strangers a day mess around with her fake breasts for money. What’s her story? Where is her self-respect? Does she see herself as an object for men's pleasure and entertainment? Is that where she finds her worth? I assume that she’s bought into our culture’s view of women, and she’s just trying to capitalize on it a little bit. I also assume that she is a victim of our culture’s view of women, and she has had degrading and hurtful experiences used to teach her about them. I feel sorry for her, and wish that she weren’t demeaned to the point of resorting to this.

In a country that broadcasts all-too-frequent news reports on alleged disturbing acts of breastfeeding between mothers and their own babies in public, this is OK? This is acceptable? Even if this isn't acceptable to many why isn't this all over the news as inappropriate behavior in public when recently we have report after report of the scandalous activities of mothers simply caring for their children by nurturing and nourishing them with her breasts. Well, this, with its mixed message of sexual-public-nursing-naked-for-fun with objectification-and-paying-for-sex overtones, should certainly help clear up any misconceptions regarding the place of breasts and breastfeeding in our society. Because somehow we can post this on the internet and laugh from our jr. high dirty humor selves but a mother feeding her child naturally is considered so inappropriate FaceBook regularly deletes any images depicting a breastfeeding child, a Tampa school board sides with a principle that removes a breastfeeding woman from a public lobby and the obnoxious, in-your-face talk show The View refuses to show breastfeeding images on their show and dis on women that nurse in public. What is wrong with this picture?

Oh, and, in spite of the vaguely amusing and disturbing first glance of the above image, I find it mostly disgusting.
Posted by Jessica at 3:08 PM

While we don't let just anyone feel us up, we would love to hear from you. Have a submission? Photo? Breastfeeding joke? Email us: theleakyboob {@} theleakyboob {DOT} com. (no spaces or brackets and don't spell out "dot.")